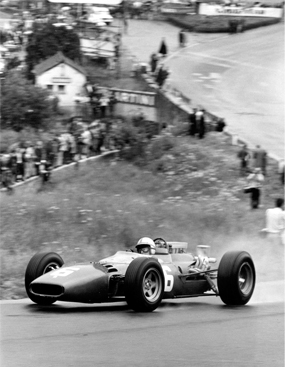 Originally a motorcycle driver and only moving to auto racing full time in 1960, British driver John Surtees (born February 11th 1934) is as at time of writing the oldest surviving Formula One World Champion, and the only person to have won World Championships on both two and four wheels.

After joining Scuderia Ferrari in 1963, a second placing at the 1964 Mexican Grand Prix secured Surtees his first and only World Championship win for the Italian team. Then in 1965 at a practice race in Ontario Canada his Lola suffered a suspension failure and crashed heavily, leaving Surtees with multiple injuries. Nevertheless, over the winter the tenacious Surtees forced himself back to fitness and was ready to race again for the following year, first in Monaco and then at the 1966 Belgian Grand Prix..

But 1966 would be no easy season for Surtees. It was dubbed the “return to power”, the first of a new Formula One era which saw maximum engine capacity doubled from the previous season to 3.0 litres. And as the opening round began in Monaco in May, few teams were ready for the new regulations with several still using 1965 engines or adapting heavier engines to suit.

It was a race of extreme attrition; Jim Clark’s Lotus-Climax suspension gave out, while Lorenzo Bandini was smashing the lap record for Ferrari before having to ease off to prevent his brakes wearing out. A still-recovering Surtees was leading for 14 laps from Jackie Stewart’s 2-litre BRM, but his V12 engine, was too heavy and the differential broke, handing the lead, and race, to Jackie Stewart. Even the eventual champion, Australian Jack Brabham, had his own teething problems, completing only 17 laps in his privately manufactured Repco V8 before his gearbox went.

Then came the 1966 Belgian Grand prix at Spa-Francorchamp, a legendarily chaotic race, on 12th June. After the Monaco engine fails nobody was taking unnecessary risks, but just after the race began the weather brought its own problems with a huge thunderstorm decimating half the race in the first few minutes.

The chaos was to continue. Jo Bonnier’s Cooper T81swung out from the road, careered off a ridge and went flying straight into an upstairs window of a nearby house. Meanwhile, triple World Champion Jackie Stewart had to be rescued by his team mates after his BRM P261 crashed into a telephone pole then landed in a ditch. As he lay trapped upside down in a car filling up with petrol, Graham Hill and Bob Bondurant (who had both gone off the circuit nearby) borrowed a spectator’s toolkit to free the Scotsman. Mercifully, all drivers survived the race, although from that race on Stewart became a strong advocate of improving driver safety in motor racing for decades after.

But Surtees, driving a 1966 Ferrari 312 with its 3 litre, 12-cylinder engine, realised stealth, and not speed, was his best bet in the storm. Letting Austrian driver Jochen Rindt pass, Surtees followed at the slowest speed possible in Jochen’s wheel tracks, hoping less displaced water would give him greater control. And once the track began to dry out he took his chance and overtook – going on to win the race.

Footage from the Monaco and 1966 Belgian Grand Prix showing Surtees, Bonnier, Bandini, Ligier, Clark and Gurney can be seen in the 1966 movie “Grand Prix”, with Surtees doubling for the fictional Jean-Pierre Sarti (the film is careful not to use Jackie Stewart as he doubles for the character Scott Stoddard, who at that point in the film is recovering from a near fatal crash).

Despite Surtees’s victory at Spa, tensions with Ferrari had been running high for some time. Just a few days later after a dispute on the eve of the Le Mans 24 hours, Surtees switched to Cooper-Maserati never to return to Ferrari again… despite, as he said in an interview in 1992, “never really leaving Italy in his heart”.