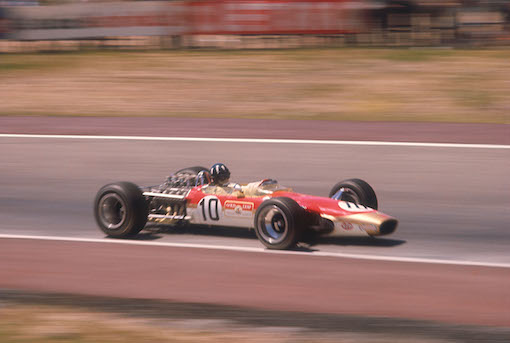 The Spanish Grand Prix on 12th May, 1968 came at an emotional time for the Graham Hill’s Lotus team. They were still mourning the deaths of both Jim Clark at a Formula Two motor racing accident in Hockenheim , Germany, and his replacement Mike Spence at a test in Indianapolis only weeks after. With their teammate Colin Chapman too devastated to come to Spain, and without a win for over two years, it looked like an insurmountable challenge for Lotus-Ford driver Graham Hill – the only works Lotus driver – to bring back the win they desperately needed.

As the race began, it seemed far from likely he would succeed. Chris Amon for Ferrari, Pedro Rodriguez for BRM and John-Pierre Beltoise for Matra swaped swapped places regularly, hogging the lead spot. But mechanical failures hit all three, with Rodriguez crashing out into a safety fence, hopes of rejoining the race dashed as spectators “descended on the car like vultures”, stripping it of anything they could get their hands on. And only 20 laps later Amon’s fuel pump short circuited, leaving Hill, more than a mile behind, only overtaking Denny Hulme’s McLaren when it lost second gear.

Hill held steady, skillfully navigating the complicated terrain and in the end, winning by 16 seconds. “We badly needed this win just now,” he told reporters. “It’s been a long time coming and it could not have happened at a better time. I reckon I completed 1350 gear changes during the race today. It was real hard work.” With all the problems the team faced as both mechanically, and emotionally, the 1968 Spanish Grand Prix would prove to be, arguably, Hill’s greatest win.